In addition to routine maintenance, storage batteries may at some time during their service life, require more extensive or unusual care. Such care should be given as soon as it has been determined that a problem exists or that trouble could be developing. As a result, this section deals with the means of identifying existing or impending problems and how to go about forklift battery repair. You might also consider whether it’s better to repair or replace your forklift battery.

If the suggested operational remedies are ineffective, it may be assumed that there is an internal problem and it will be necessary to disassemble the cell or cells to inspect the elements and sediment well. If the cause of the problem can only be corrected by completely rebuilding cells or the forklift battery, this should be reported to the designated authorized personnel.

Undercharging a forklift battery, even to a small degree, if continued, leads to excessive “sulfation.” The same is true of forklift batteries which have been left standing in an uncharged state for an extended period. High temperatures rapidly accelerate sulfation when forklift batteries are left standing in a partially charged condition. The cells of a sulfated battery will give low specific gravity and voltage readings. The forklift battery will not become fully charged after a single normal charging when sulfation has taken place over a prolonged period. Without intervention of industrial forklift battery repair or restoration, over time these batteries will become increasingly inefficient and will no longer be able to be repaired or restored. If the sulfation has not progressed too far, it may be possible to restore the forklift battery to a serviceable condition by using the following special procedures:

(2) Bring the electrolyte level up to a point which is just visible over the separator protector by adding approved water.

(4) Place the forklift battery into service and discharge it to a fully discharged condition.

(5) Charge the forklift battery again until the specific gravity shows no change during a 3-hour period.

(6) Repeat the cycling process until the specific gravity rises to within 30 points of a normal fully charged forklift battery, then place the forklift battery back in routine service. Even though specific gravities may be lower than normal they should not vary much from cell to cell. If they do, problems other than sulfation may be present.

While a storage forklift battery is in a charged state, a local electrochemical reaction takes place within the cells which causes very gradual discharging. This is known as self- discharge. A small amount is quite normal in motive power batteries where grids are made from antimonial lead. The rate of self-discharge is temperature related, however, and increases significantly as temperatures rise.

The normal rate at 77 degrees F. to 80 degrees F. causes a loss in specific gravity of about one point (.001) per day. This becomes of concern only when a wet forklift battery is to be stored for weeks at a time. It can be ignored as a factor in normal forklift battery operation.

It is possible, however, particularly during the latter stages of a forklift battery’s life, for the rate of discharge to become much greater and even limit the forklift battery’s duty cycle. Excessive self-discharge may be caused by defective separators or plates which have become shorted at the edges. Edge shorting is usually caused by loss of positive active material which can fill the sediment well or build up on the top or sides of the plates and eventually bridge the space between the positives and negatives. If a shorted condition seems likely, the element should be pulled for examination and the defective separator replaced, shorts cleared, or cells replaced to commit any kind of forklift battery repair. However, if the sediment well is full, salvage is impractical.

A capacity test is sometimes desirable to determine a battery’s actual discharge capability as compared to its 6-hour rated capacity. This can be a significant diagnostic tool when equipment does not operate as expected and it can help determine when the forklift battery should be replaced. When a forklift battery consistently delivers less than 80% of its rated ampere-hour capacity, either some cells are sub-standard or it has reached the end of its useful life and should be replaced. A test discharge is performed by discharging a fully charged forklift battery at a fixed rate under carefully controlled test conditions.

If you have any questions or concerns about industrial forklift battery repair, please don’t hesitate to reach out! 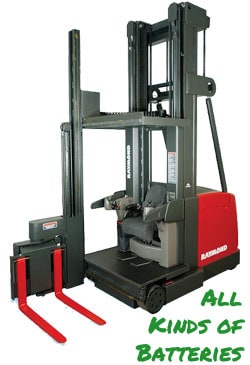 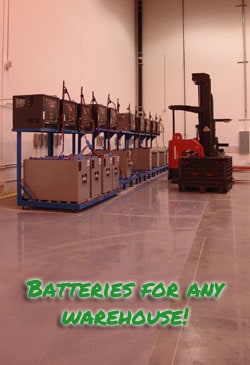 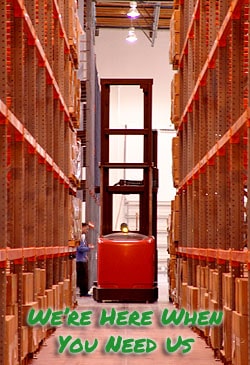 After three to four years of use, lead-acid industrial forklift batteries start to pronouncedly lose their ability to hold a charge. The result is less

If you need more information about what we do here at Green Power Forklift Batteries then please use the contact form below, we will be